How it looked two years ago: 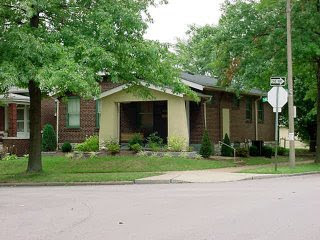 Recently repainted. Subtle yet stunning.
What I've always loved about this house is that the sidewalk doesn't cut through the front yard.
I figure I've walked by this house 7,776 times as a child walking to grade school every day. This figure includes the walk home and back for lunch. 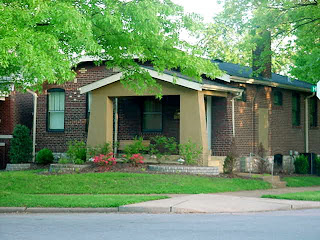 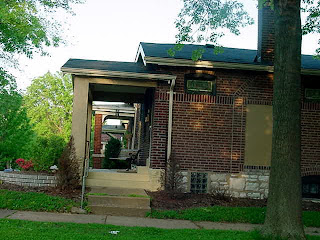 Posted by Christian Herman at 10:50 No comments: Links to this post

Beau goes to the Pride Pet Parade on MGF 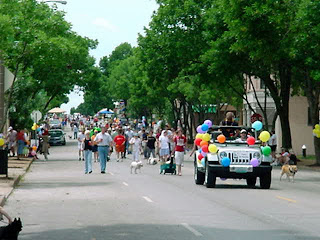 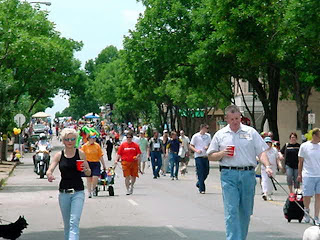 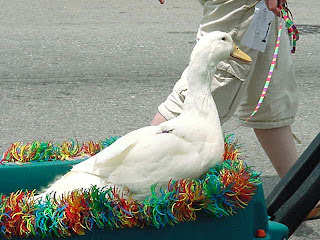 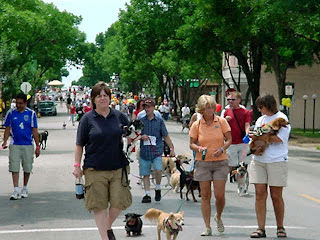 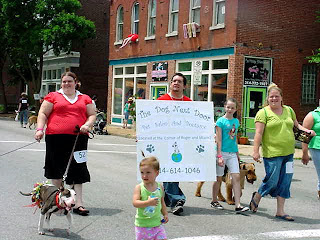 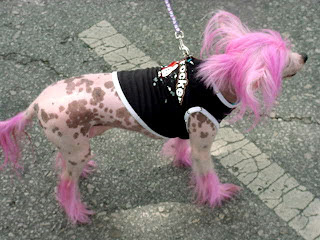 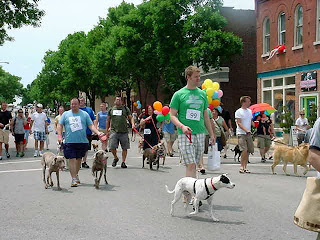 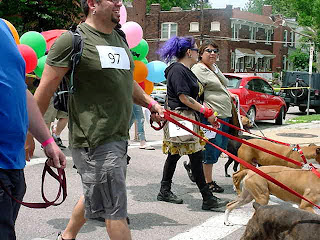 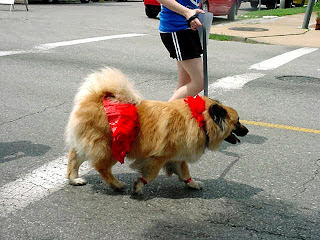 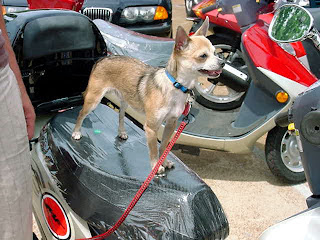 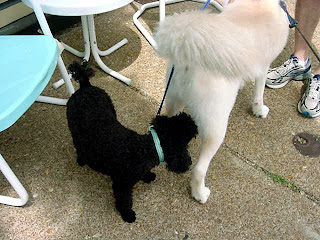 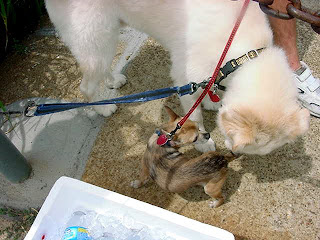 Email ThisBlogThis!Share to TwitterShare to FacebookShare to Pinterest
Labels: Beau

I've a hilarious neighbor named Gary. He's my contractor, a block captain, and one of the most fascinating creatures I've ever met. I've been begging him to start a blog but he's a busy man.

We were discussing our mutual squirrel problems on the neighborhood listserv and since Gary (or Gray, as my typo named him) won't blog...

While we're talking about squirrels...

Squirrels have also chewed through the new screen door I had installed in my tenants apartment upstairs, helped themselves to a loaf of bread (while Tammy and Maureen watched TV in another room) and left through
the hole.

I'm left having to do a huge repair. Bastards.

Same thing happen to Gray Pey. He worked a deal with his squirrel and
now feeds him to prevent entry.

"Gray" Pey here. Here's what happened chez moi. Our neighbor kids found a baby squirrel about 3 inches long (not including tail) our family kind of took it away from these kids (they meant well, but weren't the sharpest knives in the drawer). We raised it on cat milk that some cat guy up near MGF had, I really didn't want to know how he got it, but it was in those cute little baby doll milk bottles, and it seemed to agree with "Squirrel Nutkin". He got bigger, used to ride around on our shoulders, and make these cute purring sounds. Then he started using me like a tree, going round and round and up and down. I'm really ticklish when it comes to squirrels racing around on me, so he was about 6 inches long (body only) and I decided "he" was ready for life out in the wild South Side (I never did lift up his tail to find out if he really was a he).
He was always at the back door looking for peanuts, which we would give him right from our hands. One creepy thing was that he had this habit of jumping down on your back from the tree in the backyard right at dusk, wanting one last peanut. It always felt like some ghostly hand with long fingernails suddenly grabbed you, and I always expected to turn around and see that hooded guy with the scythe.
Eventually he made friends with other squirrels (about three of them). He taught them about the free handouts at the back door. Pretty soon they were there all time and didn't eat the peanuts as much as they would run off and bury them. Eventually the novelty wore off and I felt it was time to wean these freeloaders so we quit feeding them. Imagine my wife's surprise to come home into the kitchen to find Squirrel Nutkin and his buddies going through our cabinets. He had made about a perfect two inch hole in the window screen. The rest of the summer we had to keep the window shut because they kept sticking their head through checking out the situation. I didn't want to fix it prematurely since they might just bite a new hole.
We started just throwing peanuts out in the backyard (unsalted of course) just to keep them satisfied so they wouldn't break in. What we didn't know is that this triggered a return visit from the hooded scythe guy that put the clamp on our mutt Thurston. It turned out he was the one eating all the peanuts, shells and all. Dogs aren't supposed to do this and he died before we figured it out.
The whole family really doesn't like squirrels now and after Squirrel Nutkin taught his derelict friends about the tomatoes I haven't grown them either. I can buy them in East St.Louis for 50 cents a pound. However the last time I was there, I was told that the deer are eating the tomatoes. I wonder. . . did Squirrel Nutkin some how swim across the Mississippi?
My warning to everyone: don't encourage the squirrels!
Gray Pey


Posted by Christian Herman at 22:13 No comments: Links to this post

I was excited to discover this ashpit repurposed into a green house. I peeked, that's asparagus. 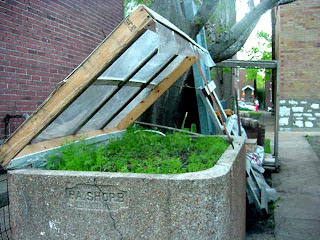 Posted by Christian Herman at 00:12 No comments: Links to this post

My friend Pat emailed to say This is pretty neat. Just move your cursor slowly around and you will get the feeling you are flying over mountains.


It's the visual equivalent of a Philip Glass score.
Bleak and redundant.
Posted by Christian Herman at 01:19 1 comment: Links to this post

How to embarrass your neighbors and draw ridicule 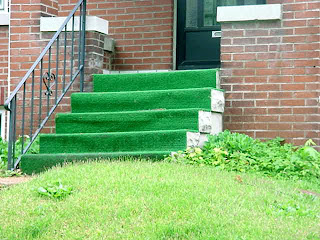 The Horror.
Posted by Christian Herman at 12:32 No comments: Links to this post 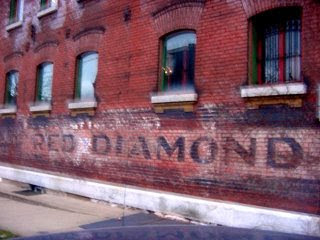 Chris has been in town the last few days packing up his partner and her children to move them to the West coast with him. He called a few times, we missed each other then finally today I was able to drive over to say good-bye. Again. We've been in the good-bye business for the last year.

The Red Diamond Inn was jumping with friends and family helping with the packing. I made my brief appearance and headed out to the street where I saw five year old Sadie sitting alone on the stoop with her head lowered to her fists.

What's wrong Little Sadie, I asked sitting down beside her.
I miss my friends, she wailed.
I pulled her onto my lap.
You'll make new friends in Seattle and it's beautiful there.

She said, I don't care about seaddle! No one asked me if I wanted to go, I was told. I wasn't given a choice!

I was astounded by her self awareness, eloquence, and understanding of choice.

I realized telling her about Seattle was only dismissing her grief.

Why will you miss your friends, I asked. Because I know the power of separation and how poorly I had just handled it with Chris. I was practically indifferent not wanting to become emotional and distract him from packing and the time line.

They are nice to me and fun to play with. They like me.
She then told me about one of the older boy she would miss as I admired the part of her hand where she has dimples and I have knuckles.

What else will you miss?
This house. My bike, I don't get to take it, my Mom is donating it (this was said with a bit of despair). I want to stay here!

We dawdled a bit as I talked about the mountains and flying in an airplane. The people will look this big she said as she jumped off my lap and showed me a small rock.

I took her plump hand, and we crossed the street so she could take a good look at the Red Diamond Inn. To say good-bye to it I guess.

I see something you don't see she announced.
I remembered the game and asked about the color. She grinned. We played the gane for ten minutes.

Eventually she pushed her bike back into the yard, hugged me and waved good-bye. A good-bye much more graceful and poignant than I had managed.

Chris, I forgot to tell you I love you.
Of course you know that...I just needed to say it. 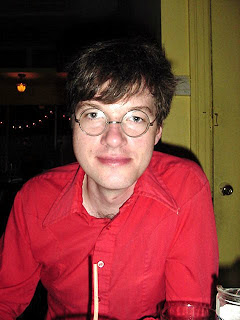 Posted by Christian Herman at 22:43 No comments: Links to this post