This is what happens without a flu liner in the chimney. 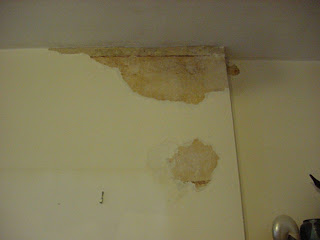 Fumes from the furnace escape through the brick and mortar on the chimney breast and the plaster starts to crumble. What made my situation worse was not having a flu cap for many years. Pigeons love to roost above the chimney where it's warm in the winter. They inhale the flumes, pass out, and drop into the flu where they expire.
I know this because my neighbor pulled 15 dead pigeons out of the flu ten years ago.
That's right: 15 dead pigeons!.

I had the liner installed a few years ago. I've been delaying having the chimney breast repaired (use joint compound) because that means painting. I hate painting because I have problems using the perfect value of white. I'm leaning towards a white with a hint of rose at the moment.

My friend and neighbor Gary is repairing the chimney breast (as well as the whole room) and the photo above shows where he's tapped out the old plaster. (Gary is the author of the doughnut report that has been printed here. He's also a stellar Home Healer. Trust me, this is the guy you want to hire) 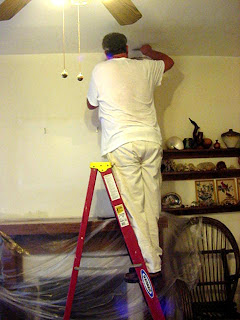 Posted by Christian Herman at 18:41 No comments: Links to this post

Over a month ago mystifying work began at Gustine and Utah here in TGS. That's Susie G. in the hat on the left hand side: 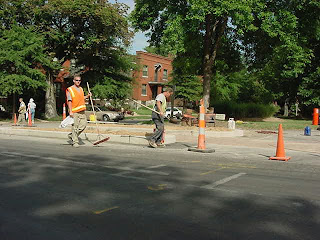 />
At a recent TGS neighborhood meeting I asked J-FLo about the work and she explained it was designed to make the intersection 'pedestrian friendly' and that the ADA ramps cost 4,000.00 each.

The site was the subject of conversation over dinner this weekend with a few of my neighbors and continued on our neighborhood list serve where it developed into a raucous brawl.

I lived a block away from the intersection as a child and crossed it daily as a teenager. I never had a problem on the walk to high school and have always enjoyed the street scape when I wasn't spying on bricks.

I'm a preservationist so this New and Improved intersection gave me the willies: 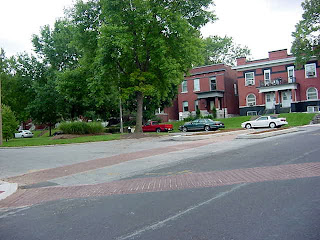 I think the intersection looks much better than before, for a number of reasons: the pedestrian crosswalks are clearly identifiable with the pseudo-brick paving; the curb ramps have been modified to meet ADA standards; the planters separate the pedestrian crossing from the u-turn traffic on Utah and the through lanes on Gustine, while also provide an additional level of psychological safety for those crossing Utah on the east side of Gustine - a crossing that is over 100 feet from curb to curb; and there is opportunity for collision between pedestrians and traffic southbound Gustine traffic turning left on Utah. And when the planters are filled, I bet it will look a lot better.

I've looked around on the city's website to see what funds are being used for
this project. While I couldn't find the intersection listed specifically, my
guess is that this is stimulus money from the American Recovery and Reinvestment
Act. $2,575,000 has been procured for "overlay and pedestrian improvements."
These projects are used for:

and to "enhance safety for pedestrians, cyclists, and vehicles."

Considering the time constraints involved with this funding source, I'm glad to see the city was able to get some of this highly competitive ARRA money to implement projects like this, which improve pedestrian conditions and create infrastructure that is accessible people of all abilities. If Saint Louis couldn't have identified shovel ready projects like this as quickly enough as they did, the funding would've gone to the next city in line.

I'm still ambivalent but was impressed with his research and feel for the site. 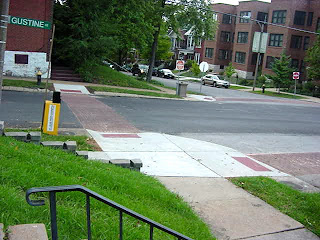 The project, according to my alderwoman, cost $40,000. I don't know what qualifies as informed so I'll render my informed / uninformed opinion. I may be mistaken, but the intersection already had ramp access so, in my opinion, the ADA argument is not a valid reason for the upgrade. Also, beautification has been proposed as a reason or at least a result of the upgrade but the beautification has happened on a block that is one of the most, if not the most expensive in the neighborhood and arguably one of the prettiest, so while I agree that neighborhood beautification is commendable the result, when compared to other options, may not have yielded the best value for users and the community.

Finally, as to "slap[ping] some paint on it"; In my experience, the painted crosswalk, a la Abbey Road album cover, is a far more urban indicator of a crosswalk than a planter and some textured concrete or pavers. I'm not saying that the pavers, curbs and planters don't do the job it just seems very suburban to me. If the motivation for the project was to rectify the "problems" that some pedestrians had at the intersection there may have been more economical options.

I agree with Josh, it does have suburb styling. Tower Grove Heights is a historic district. I guess it doesn't include the streets.

It's interesting to me that this corner is also the site of the several unsold Capistrano condos. 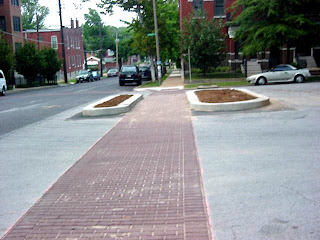 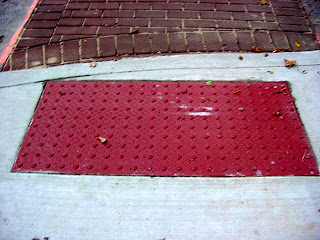 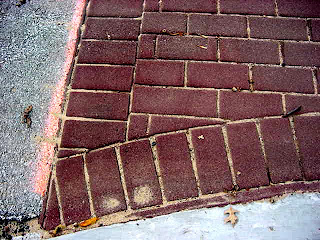 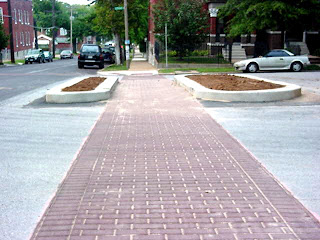 Turn around and 'brick' walk: 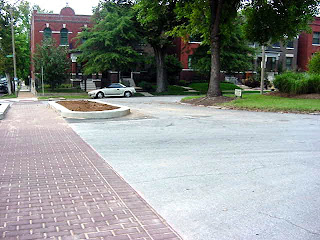 Posted by Christian Herman at 20:36 3 comments: Links to this post

Two weeks ago I was on S. Grand during my daily visit to the Post Office on the Kill List when I encountered a guy holding a tool that was pointed to the ground.

I discovered he works with The Design Workshop and was taking the temperature of various surfaces.
I gave him my email address and asked him to stay in touch:
Christian,

Below is a summary of the thermometer readings I
took while walking the corridor last week. I hope this is helpful....
All the best,
Paul

Brick is the winner!
Posted by Christian Herman at 14:07 No comments: Links to this post

Hidden beneath the miles of asphalt streets in St. Louis are historic Hydraulic Press pavers. Some streets have never been paved and in TGS there's still a brick street in front of Fanning School and a photo of the street is on this blog.

A few days ago Bad Tim and I grumbled over the grinding on Fairview. Grinding removes asphalt so the street can be freshly asphalted. Never mind the impact to the environment with asphalt* there's a one block Green Alley in the neighborhood (http://www.towergroveheights.com/Meeting%20minutes/Mar%2009.htm) so how about some Green streets?

Don't even get me started over the Grand Streetscape. 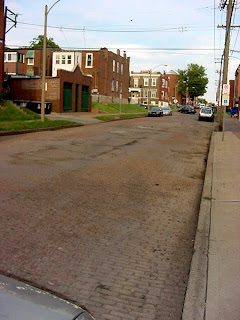 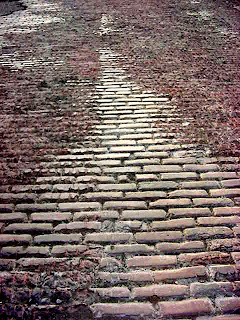 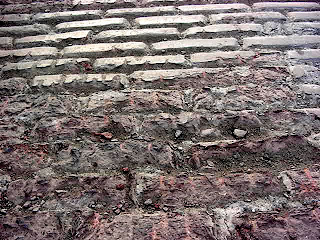 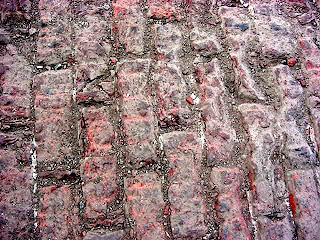 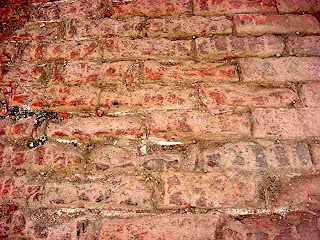 *Yes, I'm aware that when laterals/sewers collapse it causes problems with brick streets.
Posted by Christian Herman at 11:01 3 comments: Links to this post

Email ThisBlogThis!Share to TwitterShare to FacebookShare to Pinterest
Labels: Pavers

Just received this email:
Hi Christian,
This is Charbel over at Wikio, the number 1 news aggregator and blog-indexing website in Europe, indexing nearly 200,000 English-language sources. I'm contacting you because St. Louis Brick just entered at number 20 in our Architecture and Design rankings, which is one of the new categories created by Wikio for August.

To those who appear in the rankings we offer a badge that displays your blog's position, which is automatically updated each month. You can go to realclimate.org or freakonomics.blogs.nytimes.com to see what it looks like. The rankings themselves are calculated using links that appear in blog posts on other sites towards your blog.

I was momentarily flattered and then immediately worried, something about the honor indicates responsibility. YIKES!

I chase brick and the incidental (yet always fascinating) mortar as a mildly driven obsession. It's a interest which means if it doesn't translate into cash it's usually on the back burner...where it really does simmer.
Posted by Christian Herman at 16:55 2 comments: Links to this post

While working in Marti's Garden in early June I noticed a column of smoke rising from the train tracks. That was the first of a series of small fires on the tracks and large piles of ties were being burned. It just wasn't one pile of ties but many spread out over an eighth of a mile. I noticed ties burning three separate times over the last two months.

Recent reports from neighbors include a car and a van being set on fire in alleys. There's also been other alley fires.
A mattress was placed against this fence and ignited. 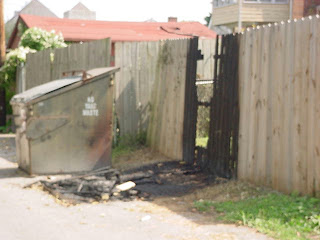 And on another block: 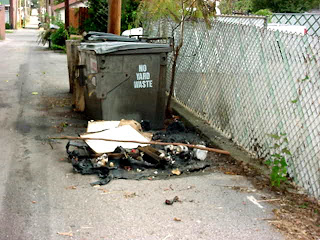 There oughta be a Law

I recently posted the photo below and asked what the image had to do with St. Louis Brick. No takers!

In the mid 1800's a steamboat named White Cloud ignited on the levee. The fire spread and a third of the wood frame buildings in St. Louis burned. An ordinance was passed forbidding the construction of wood buildings and resulting in our astonishing brick work.

Somewhat cloud related: While driving home today I glanced in the rear view mirror to keep an eye on the lunatic edging closer and closer to my car. I was charmed to see the reflections of two white clouds on their windshield situated where two people would have been sitting in the car. It was spooky cool. 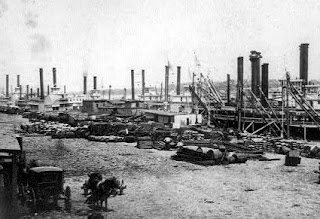 Posted by Christian Herman at 12:31 No comments: Links to this post

Save the date: Saturday, Oct 3. 11-7 PM
The Morgan Ford Strip will be closed to vehicular traffic and the street open for a music festival, street fair and vendors.

Bruk and I will be there in a booth selling our handmade clothing and jewelry.
We've invited the luminous Fred Friction to join us at our booth

On Facebook: The Morgan Ford Strip.
Posted by Christian Herman at 00:16 No comments: Links to this post