A neighborhood landmark since 1895, the House of Good Shepherd was razed in 1969, to make way for the Zayre Plaza shopping center. The design of the Zayre Plaza formed a T with Zayre at the top of the T and other stores on all other sides.

During my college years, I worked at the So-Fro fabric store in the plaza. During the early to mid 70's, the plaza was still relatively safe but rapidly descended into a crime ridden area due to being mostly enclosed from view. So-Fro (bought out in the late 70's by Joanne fabric) moved along with the Kroger anchor store (at the bottom of the T.)

Prior to being razed, it was the House of the Good Shepherd, a vast red brick structure. Its eleven acre site was donated by Adolphus Busch, and proceeds from the sale of the old buildings at 17th and Chestnut Streets, together with a $75,000 legacy from Mrs. Winifred Patterson, enabled the erection of the massive building on Gravois. It was operated as a home and school for penitent females by the Sisters of the Good Shepherd. My sisters and I were often threatened with exile to this compound if we didn't 'behave.' It was an effective threat.

Never knowing it's official name as children, we referred to it as The Bad Girl's Home. This is a poor resolution photo of the original building, long before the surrounding neighborhood of TGS was built. And long before the massive 12 foot high chain link fence went up. 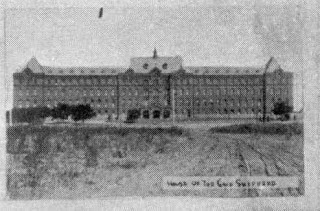 Posted by Christian Herman at 20:11