In the twelfth century, either King Louis VI or King Louis VII became the first French King to use the fleur-de-lis on his shield. Later, several English kings incorporated the symbol into their coats of arms to show their claims to the throne of France.

From the block of 3900 Juniata, the fleurs span the cornice of the building. 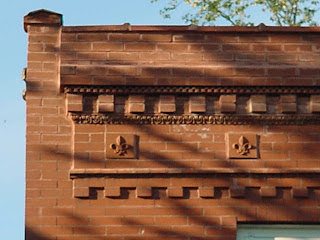 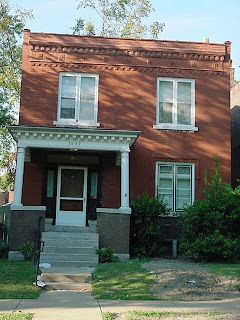 "The flag with a solid red background has two broad heraldic wavy bars, colored blue and white, extending from the left top and bottom corners toward left center where they join and continue as one to the center right edge. This symbolizes the confluence of the Missouri and Mississippi rivers. Over the point of confluence a round golden disk upon which is the fleur-de-lis of France (blue) calling attention to the French background of the early city and more particularly to St. Louis of France for whom the City is named. The golden disk represents the City and/or the Louisiana Purchase. (Heraldically, the disk is a "bezant" or Byzantine coin signifying, money or simply purchase.)

The flag’s colors recall those of Spain (red and yellow or gold), Bourbon France (white and gold), Napoleonic and Republican France (blue, white and red), and the United States of America (red, white, and blue)."
Posted by Christian Herman at 01:35