4000 Utah is one of my favorite blocks in TGS and is populated with perfect Craftsman Bungalows. Note that all the trees along the south side of the street have been removed. 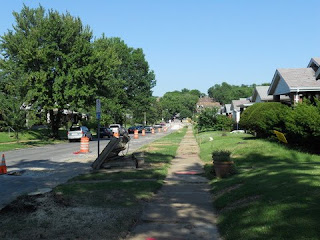 The post below was written by Marsha who lives on 4100 Utah.

MSD work on Utah to replace aged storm sewers from Roger to Bent began about two
months ago. Homeowners on the 4000-4100 blocks were notified by a brief letter
that the work was to take place, which included only the name of the contractor
(Gershenson Inc.) and that the work could take up to a year to complete and
would impact Utah, Roger, Oak Hill and Bent.

After the work began at the corner of Utah and Roger, it was determined that
Laclede Gas should initiate work on gas supply lines on the same two blocks of
Utah, ahead of the sewer line replacement work. Since April or early May,
Laclede has been working their way up the two blocks, while MSD remained in the
area of the Utah/Roger intersection.

About 10 days ago I heard via rumor that MSD would be destorying all street
trees on the south side of 40-41 Utah (about 20) while trenching the entire tree
lawn on the two blocks to a depth of 9 ft.

The scope of the sewer replacement project was not shared in any detail at all
with homeowners, or apparently with officials of the City. (Is it true that
there is some kind of covenant that MSD has no obligation to obtain approval
from the City for the scope and method used to make repairs?)

Last night several large sections of new sewer pipe were laid out on top of the
tree lawn heading west from Roger on the south side of Utah. At the end of the
day today, all but one of the street trees on 4000 Utah had vanished, cut to
almost grass level by chain saws.

Is there no other way to accomplish sewer line replacement than to devastate a
neighborhood, destroying decades old trees that provide shade, noise and toxic
pollution reduction, habitat for wildlife and great character and charm to the
homes on the block? The fact that the tree lawn would be trenched and trees
destroyed was never communicated in any way to property owners.

Surely this can't be the only two blocks in the City to require sewer line
replacement -- does the same devastation occur on every block where MSD does
replacement work?

Posted by Christian Herman at 21:42

I would be outraged if I lived in that block. There's a lot of digging going on in St. Louis Hills just east of Francis Park. I bet they wouldn't dare cut down those trees.

Has MSD ever offered Lateral Liners as alternatives to the replacements?
http://www.openmydrain.com/Services.aspx