We (as every house in the city) had an ash pit on the back lot of our house at 3964 McDonald. They were used to burn household rubbish and garbage.

Once that was outlawed (along with burning leaves which was tragic, the smell was wonderful and announced autumn) People took sledge hammers to the pits and opened the side facing the alley. The resulting platform became a staging area for aluminum trash cans.

The cans (subjected to rats ad other vermin) were replaced by the dumpsters in the late 70's.

I do encourage everyone to have the experience of smelling burning leaves, just a couple. 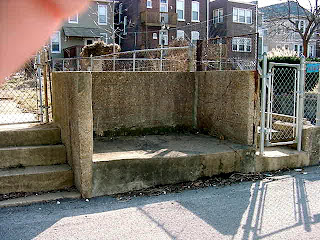 Here's Beau, hot on the trail of a scent: 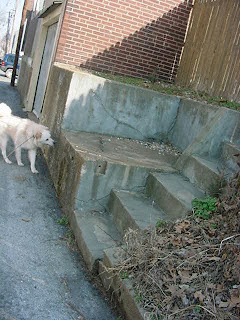 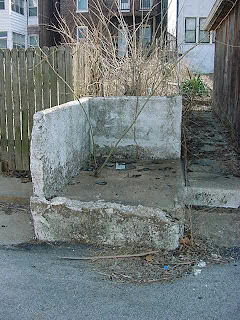 Posted by Christian Herman at 23:44

I thought these were for the ash coming from the coal-fired furnaces which were in every house in the City at one time. Including the one which I replaced with a high-efficiency gas model. Well, it didn't burn coal at it's end. It had been converted to gas years ago. The pilot light could have boiled a pot of water in a matter of a few minutes. Yeah, I don't think anyone is going to build a concrete box just so they could burn their leaves in the fall.

Leaves were burned in the street gutters. I doubt anyone hauled the leaves to the pits for burning.

But yes, they were constructed to contain coal ashes and also had various other applications over the decades.