Fly me to the Moon

When I was a child my family took a train to Los Angeles to visit my uncle and aunt who were living in Torrance. Both of my relatives had Top Secret jobs. My uncle was an aeronautical engineer and never revealed his employer. My aunt was a secretary. She told us the ribbons from all typewriters were collected at the end of each day and burned. The Cold War was all that.

In the 60's Torrance was a sunny new development of split level homes and kidney bean shaped swimming pools. I mostly remember the white concrete streets (and in retrospect, no litter) and the rocket ship slide in Los Arboles Park: 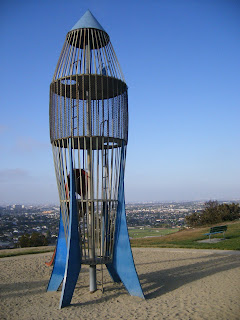 I found the photo on google, its by Chris Minerd. If you look closely you can see the slide in front.

The St. Louis version of Rocket Ship playground is on Boyle in the CWE. The rocket slide is pocket size and is the only remaining piece of the playground: 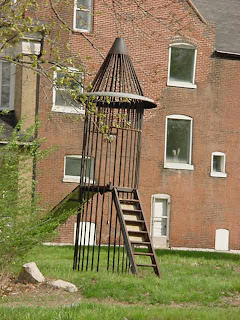 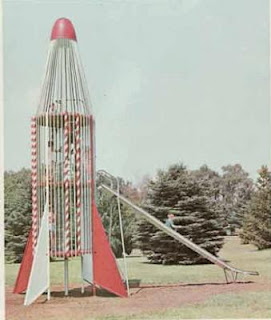 Landings and a steering wheel in the cone of the rocket: 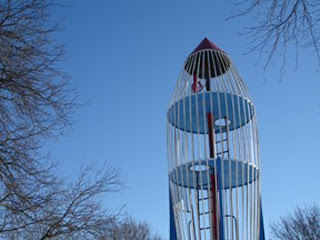 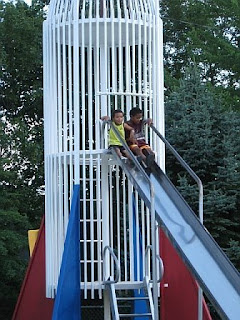 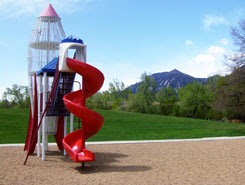 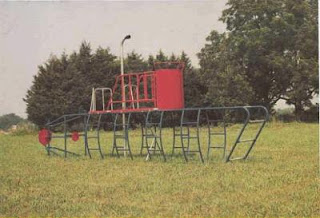 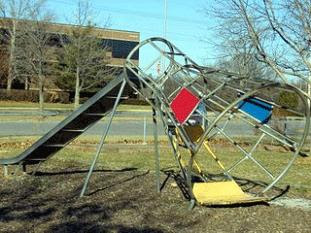 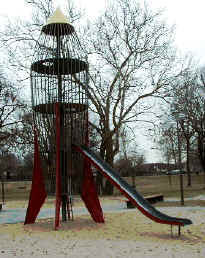 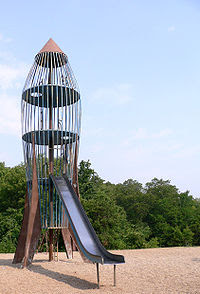 Posted by Christian Herman at 22:17

Rocket Park in Maplewood has been there for years. They had a great old playground that I played on when I was a kid and recently put in a new (and not nearly as fun!) playground with a rocket.

I live in Lancaster California and my local park had a rocket slide for decades. However last year I drove by the park and realized that it was gone! One by one, everything that was in the park has been replaced by the plastic stuff. This is sad, but I do understand about the rocket slide. By the time I was seven, my hips were too wide to get in the bottom entrance. After that I could only climb up the slide to use it. only small children could get in the rocket.And there was no way an adult could have gotten a child out of the closed segments of the rocket. Being able to get a child out or off a piece of playground equipment is rather paramount I think. I do miss it however.